Scott Adsit played Pete on NBC’s 30 Rock for seven seasons and is an alumni of The Second City, where he was part of the ground-breaking show “Pinata Full of Bees.” In this episode, which celebrated Improv Nerd’s 5-year anniversary and was recorded at The Chicago Podcast Festival, Scott talks about meeting Paul McCartney, why he still loves to improvise and what Jimmy was like when they both started taking improv classes at Columbia College in Chicago. 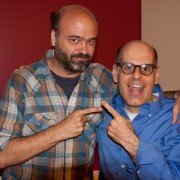 The anxiety of getting bigger
0 replies

The 5 Things I’m Most Grateful For

We Are Brave
Scroll to top
Menu