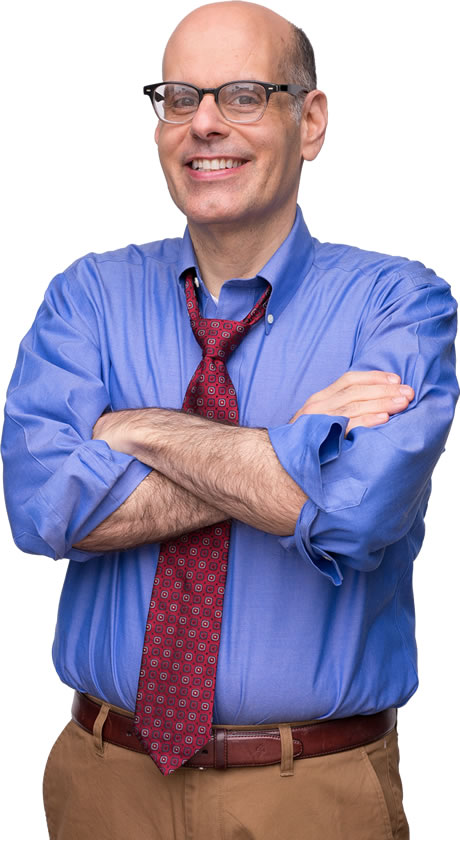 Jimmy Carrane was not raised by wolves. He did, however, grow up in a house where he wasn’t encouraged to express himself. This is very similar to being raised by wolves except wolves always get to be wolves. Except when they’re in sheep’s clothing. The good news is, Jimmy’s early years as a non-wolf in non-expressive clothing changed in 1986 when a chubby, insecure, 19-year-old Jimmy drove his parent’s Buick Station wagon to Chicago.

In Chicago, he didn’t find wolves. (Frankly, he was done with the wolf metaphors.) He did, however, find improv. And while he didn’t quite know it, that station wagon landed him square at the beginning of an over 30-year journey as a comedian, performer, and teacher.

His improv studies and performances began among a legion of legendary misfits at The Second City and iO Chicago (then known as Improv Olympics). Jimmy also became one of the original members of The Annoyance Theater. Years later, he would return to teach at all three theaters, excited to share his experiences and guide a new generation of performers through the art of improvisation.

During his team tenure, Jimmy was a member of Jazz Freddy, Carl and the Passions, and the original cast of Armando at iO Chicago. He also created one of the first two-person improv shows, “Naked” co-starring Stephanie Weir.

From teams to a duo and finally to solo performance, Jimmy’s performing career evolved. He wrote and performed his own one-man shows, such as the hit “I Am 27, I Still Live at Home and Sell Office Supplies” and “Living in Dwarf’s House.” Jimmy’s improv took him into interviewing on public radio in Chicago, where he was the host of Studio 312 and talked to everyone from Conan O’Brian to Cindy Crawford. He co-wrote Improvising Better: A Guide for the Working Improviser with Liz Allen and is the author of Improv Therapy. He is also the host of the podcast Improv Nerd on Starburn Audio. Jimmy teaches his award-winning Art of Slow Comedy classes and workshops in Chicago and across the country.

As a corporate trainer, Jimmy has taught corporate improv workshops for Fortune 500 companies, salespeople and advertising agencies to bring the art of improv to the workplace. Rounding out his performance résumé are film and TV credits in such productions as Public Enemies, The Playboy Club, Natural Born Killers, The Untouchables, ER, Early Edition and a (metric) ton of independent films.

He lives in Evanston, IL, with his wife, Lauren, their daughter, Betsy, and their cat, Coco, whom they call Moosh Moosh for no apparent reason.