Today, I want to give you three long forms that won’t fail in class or rehearsals. These have been tested over and over again in my classes, workshops, intensives and rehearsals, and for the most part, seem to be a big hit with the students.

So here you go. I hope you try these long forms out in class and rehearsals and have as much success with them as I have had over the years. Let me know how it goes or if you have any modifications that work for you.

Want to take your improv to the next level? Sign up for Jimmy’s Art of Slow Comedy Level 2 class, starting Sept. 6! The Early Bird deadline ends Aug. 23. Sign up today! 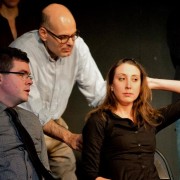 Three Simple Long Forms you can do right now
5 replies

5 Ways that Journaling Can Make You a Better Improviser

Creating a Sense of Community
Scroll to top
Menu