My almost four-year-old daughter, Betsy, was playing with her two-inch tall plastic Disney princess dolls, when Cinderella’s head fell off and rolled under the couch. She looked and looked and couldn’t find it.

So she decided to have a funeral for Cinderella. She lined up all the other Disney princesses on the coffee table and sat them in her tiny toy chairs as if they were sitting in a church.

Betsy has both Playmobil people and Fisher Price Little People, and she’s given each of them names and in some cases even a back story, like Gary, a Fisher Price person whom she says owns a Home Depot and also works as a doctor at the hospital. And, as expected, the other toy people came to pay their respects, since Cinderella was beloved by so many.

And then, one by one, the Disney princesses got up and said something nice about Cinderella.

Snow White said she was kind to animals, even mice.

Sleeping Beauty said Cinderella was beautiful inside and out.

And Rapunzel said she loved everything made out of pumpkin — pumpkin pie, pumpkin bread.

When I came into the room and Lauren told me what they were playing, I was sorry I could not attend, because I love funerals. I get that from my mom, and now apparently Betsy gets it from me.

As a parent I was conflicted about this whole funeral game. Was it appropriate for her to be playing it? Growing up Catholic there was a lot of mystery and shame about death. As a kid, you instantly knew it was a taboo topic and something you didn’t joke about. I certainly would not have been allowed to have a pretend funeral.

So on the one hand it’s healthy, I think. Since I’ve been spending so much time with Betsy because of Shelter-in-Place, I’ve seen how much joy and laughter an almost four-year-old brings to the party. I also see as a parent how selfish I have become because I don’t want her to ever grow up. I want to make time stop so she will always be in this constant state of wonder, where she can laugh for 30 minutes playing a silly, totally made up game by her dad, or get excited about little having an impromptu dance party to Kelly Clarkson.

There is also a sense of pride that I have that she is getting something I did not get, and that is the freedom to express herself and the encouragement by both of her parents to use her imagination.

But I am not going to lie. I am a bit worried she got her dark sensibility from me, which I have been trying to hide from you for years, even though you can see it a mile away.

We still have not found Cinderella’s head, and I am told by Betsy that if we do find it, Cinderella will come back to life. Which is good to know, and means we will all live happily ever after in the end. 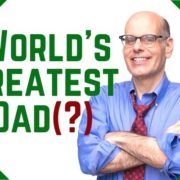 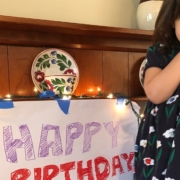 Taking In the Love On My Birthday 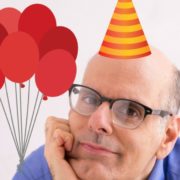 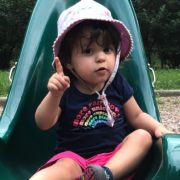