One of the greatest privileges of being an improviser is feeling like you are part of a community. That sense of belonging is actually what attracted me to improv in the first place, I just didn’t realize it at the time. In fact, many of the bonds that I formed with my fellow improvisers have turned into friendships that have lasted more than 25 years.

And one of the coolest things about being an improv teacher is being able to foster this sense of community for others. Over the years, sometimes the students in my Art of Slow comedy classes will decide after their performance that they want to form a group. Nothing makes me feel more proud than when students click so well together that they want to from their own independent group.

Recently, some of my students did just that. They are going by the name of Improv Bus. They have set up a regular rehearsal schedule and they have hustled to get a bunch of shows. They have brought me in to coach them for a couple of rehearsals. But the thing that impresses me the most is how supportive they are of one another. They make plans to go and see one member’s play or another person’s show at iO.

This reminds me of when I first started out, and we’d go to other people’s shows and afterwards we’d hang out in late-night diners drinking coffee and eating stale pie, talking about how we were going to change improv forever.

Those were the best times in improv, just hanging out. There was hope in those days. There was fellowship. There was fun.

Improv has gotten enormous since I started. I hate to sound like that grizzly old man sitting at the end of the bar who says shit like, “In the olds days in Chicago, if you wanted to be part of the improv community, all you needed to do was take a class.” That has not only changed in Chicago, but elsewhere as well. I hear from people across the country about how they feel improv has become cliquey. Not inclusive. This makes me sad.

As a teacher, I want to give people that feeling of belonging that I got when I first started out. It’s harder for people to find that today, unfortunately. But it is there, and one way to find it, apparently, is to take the right people and put them on a bus. 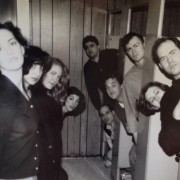 Are You Lost in the Improv Community? 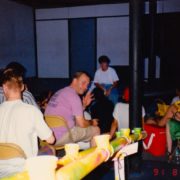 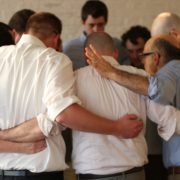 Why I Still Do Improv
2 replies