Grief in the Era of COVID-19 - Jimmy Carrane

As you read this, you are most likely hunkered down somewhere, social distancing yourself from the rest of the world. You probably have not left your home in days, except to gather food supplies and hoard paper products. COVID-19 has changed our lives for the time being, and at this point, we don’t to how long this will last and how much our world will change permanently.

Like most of you, I have felt a range of emotions, from a high level of anxiety to constant fear. I was doing a pretty good job of keeping the panicking at bay, until Monday morning about at 9:11 a.m. CST when I received a text from a friend: “Trump is going to call for a national quarantine in 24-48 hours. Get food today. Not a joke.”

“Someone high up in the military who my sister-in-law knows.”

That is when I lost it. I snapped. I went into high alert mode. I panicked. I told Lauren I needed to get to the store before things got crazy. (The only thing that crazy was me.) My adrenaline and mind started racing. “I have family to take care of.”

I put on my puffy winter jacket over my pajamas and ran out to the garage and got in our Honda CRV. I raced to the Shell station and to fill up the tank. Nobody in these times would survive on a quarter of a tank. Then I sped across the street to the Jewel-Osco to stock up on food. When I got inside, it was not as crowded as I expected. Maybe they had not heard the news, but they also did not have a friend who had a “sister-in-law high up in the military.” As I pushed my cart down the aisles, I was relieved that this Jewel-Osco had a somewhat decent selection of food, though the pasta, tuna fish and paper products had been cleared as if a blizzard had been forcasted.

When I got to the paper product aisle, I was surprised to see several lonely packages of Charmin still on the shelf, waiting to be taken to a nice home. I am sorry to admit this, I grab two packages even though we had already stocked up, because weeks from now I did not want have any regrets. I felt some shame that I had become a hoarder, and a hypocrite, because up until that point had been criticizing those kind of people.

The strange thing is that until I pulled my cart up in line, I had not realized that their other people were in the aisle shopping.

Now as I stood in line with my huge order, there was a guy in front of me with his back to me whose cart was filled. Typically, I look to see what people buy. That is a lie, I usually judge what people buy. This guy was buying a lot of frozen meals and a brand of Vodka I was not familiar with.

When he was done, it was my turn. Behind me was guy who was talking on his cell phone, who was buying a big package of paper towels and beer.

When I got to the cashier — a very nice young woman whom I later found out she is a mother of four — she remember me bringing my 3-year-old daughter Betsy in before and she told me she had already stocked up for her family at another store called Food 4 Less. As my friend, Stu, said to me, “The people who are working at the grocery stores and CVS drug stores are the heroes. They are on the front lines.”

My order was over $200. I have never in my life spent over $200 on groceries. I was grateful we had the money to buy them and rushed back to the Honda and put them in the car and sped home. As I drove, I experienced a new kind of panic. How I was going to find room in our already over-crowded refrigerator? Oh, poor Lauren and poor Betsy! How were they going to put up with me if this goes on for months? A couple of hours later Lauren told me that the whole national quarantine was a rumor going around on the internet, but truth be told, we’re not too far away from being in a quarantine already.

It’s now Friday, and some of my fear has been replace with sadness and grief.

Grief about the changes that are affecting our everyday lives. What will normal look like when this all over?

Grief over the little things that are suspend right now, like my routines. Teaching my improv classes to the wonderful students I get to teach and learn from. And those little conversations I often have with the cashiers at the grocery store and the people who work at the coffee shops and restaurants in the neighborhood.

As my wife, Lauren, reminds me all the time, “Improv is so perfect for you. You love making connections with people, and that’s what improv is all about.”

She is right, and I am more appreciative of improv today and the connections it always gave me than I ever have before. I hope to see you all again sooner rather than later. 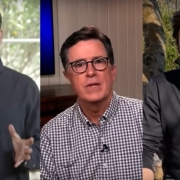 Holding On To Your Sense of Humor
4 replies

Guess What? I Love Teaching Improv