I really should not write a blog this week. I am fried and burnt out, and the best thing to do in this situation is just re-run an old blog. But I am not built that way. I am from the school of “push through the pain until something breaks,” and I rarely take my own advice. I save it for you. I am selfless that way.

Improv is an art and a science. I am sure you understand the art part, but the science part is a bit trickier. Basically, the improv scientific theorem works like this: If you take care of yourself in your everyday life, you will make better art. For improvisers, this means when you take care of yourself you’ll make better choices, take more risks, and have increased fun and a general, overall good feeling about your work.

Most improvisers work a day job, so they’re either performing, in class or at rehearsals at night. They are doing this six to seven nights a week. So with that plus the daily maintenance of taking a shower, eating, sleeping, stocking up on frozen pizzas and obsessing about improv, they don’t have much time left over to do things to recharge charge their creative batteries. They just keep pushing until one morning they get up and are so exhausted they can’t get out of bed.

Another show, another class, or another rehearsal is not the cure. The only thing that will cure their burnout is rest – good, old fashioned REST. That is the improviser’s secret weapon: REST. But nobody wants to talk about it, because improvisers are too busy today being over committed.

Plus, most improvisers (and the guy writing this blog) don’t know how to physically do rest. Instead, they push though until they get some sort of sign, and unfortunately, some never even figure out that self-care is the answer.

As most of you know, Lauren gave birth to a beautiful baby girl, Betsy, a little over six weeks ago. That little bundle of joy has wrecked my sleep. If you think I was complaining about being tired before she was born, I am now at a whole new level. On top of it, last weekend I flew down to Miami and taught two workshops and did an Improv Nerd live show at The Villain Theater. When I flew back on Sunday, my flight was delayed for four hours. Then I had to get up the next morning and teach a workshop at a college here in Chicago, schlep down to group therapy in the afternoon, followed by a visit from my mom that night. By Tuesday I was beyond exhausted.

Unfortunately, on Tuesday, I had already scheduled an interview for Improv Nerd with a guest I have been trying to get for some time — Marty DeRosa. Marty is a great comedian and podcaster. I love his comedy and honesty, and I was looking forward to interviewing him.

Since it was clear to Lauren I was running on fumes, she suggested that I reschedule with Marty. I told her I could handle it, but the truth was I was afraid I would lose the guest, and I thought rescheduling would seem unprofessional. I found myself in a dangerous place to make a good decision. I was  fatigued and filled with fear.

Tuesday morning came and Lauren and I scrambled to get the questions together for the interview. I felt tired and rushed.

Marty is great person to interview and a total pro. He came to my house and we recorded on my laptop computer. He was brilliant and honest, everything I expected from him. Then my computer died as we were about to wrap up the interview. Over an hour of this great interview lost forever. Why did this happen? Because I ran out of power, because I didn’t have the computer plugged into the wall. So much for looking professional. This was an amateur mistake and totally my fault. I was pissed at myself and embarrassed.

I said to Marty, “What is the universe trying to tell me?”

Marty did not have an answer because it wasn’t his question to answer, it was mine. And I clearly didn’t know then what the universe was trying to say.

It wasn’t until after Marty was kind enough to re-record the episode and he left my house that I got the sign the universe was trying to show me.  It was simple; it was colored red and had six sides and said STOP. Slow the fuck down. Me who teaches something called the Art of Slow comedy and who says at the end of every episode of Improv Nerd, “Walk don’t run,” was clearly full of shit.

Let’s be honest: The real reason the computer  died was because I was exhausted and I was not willing to slow down and rest. But the real question is: How many more times am I going to write about this before I get it myself?

What is your secret weapon when you feel fried or burnt out? Tell us in the comments below.
Want a fresh take on your improv? Sign up for Jimmy’s Art of Slow Comedy Level 1 class this fall! Class starts Sept. 14. Only $259 if you register by Sept. 1! 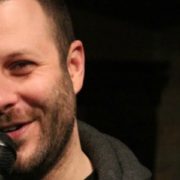