Let’s all work together | Jimmy Carrane 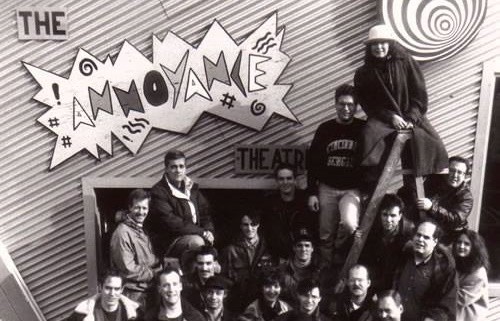 I’ve been traveling around the country a lot lately, teaching improv in all different cities. And one thing I’ve noticed in some communities is that improv can feel like gang warfare.

There are theaters that don’t want their students studying or performing at other venues. They are protecting their turf. I get it, they are scared. They think there is only so much money, so many improvisers and so much audience to go around.

That is not true. In fact, if they all work together they would all be better off. I have seen it first-hand.

For years, it was exactly the same story here in Chicago. Luckily, in the past decade or so, things have changed in the Chicago improv community for the better.

When I started out, things were very territorial. You were identified with the place you performed at, and if you wanted to go perform at another theater, you felt shunned and ostracized. When a new theater or group popped up and gained popularity, people became threatened. It was definitely an “us against them” mentality.

I remember some of my friends from iO-Chicago, where I started out, would give me shit for joining The Annoyance Theater, the same way we gave people shit when Second City didn’t hire someone from the iO. I didn’t dare hang out with people from ComedySportz because we all felt we were superior.

In a lot of ways, the improv community was segregated.

Slowly, however, things began changing and the walls came crashing down. The size of community could not be contained. The new generation of improvisers moving to Chicago did not care where they were performing. They just wanted to get good at the art form. Thank God for that.

Today, the Chicago improv community is thriving with The Annoyance and iO-Chicago moving to bigger, snazzier spaces and the Second City Training Center expansion coming soon. There are now a slew of smaller storefront theaters – Under the Gun Theater, The Playground, Chemically Imbalanced Comedy, The Den Theater, and Bug House, to name a few — that provide improvisers more opportunities to perform.

This is all possible because of the cross pollination of the theaters and training centers. When people come to Chicago they are expected to take classes at at least three or four places. They get to immerse themselves in the art form. If they don’t make a Harold team at one of the big theaters, they have a thriving indie scene where they can create something of their own. If they don’t get hired by Second City, they may end up finding a home at The Annoyance. The opportunities are endless.

I am not saying Chicago is perfect by any means. Yes, there still is healthy competition and gossip among the theaters, and there can be some arrogance, but it has improved greatly over the years.

My wish for other cities is that they see that having more improv theaters is better for the community, not worse. That encouraging your students to play and to take classes with everyone will make them better improvisers who will do better shows and hopefully develop a following.

After all, we all embrace the “yes, and…” concept on stage. Why not in our improv communities, as well?