I recently had a chance to see Mike Birbligia’s latest independent film, Don’t Think Twice, which was released in limited theaters on July 22. It’s the story of a popular New York improv group and what happens when one of the members gets a big break and gets hired by a Saturday Night Live-type of sketch show called Weekend Live.

The film stars improv vets Keegan-Michael Key, Tami Sagher and Chris Gethard, along with actors Gillian Jacobs, Kate Micucci and Birbiglia, and if you’re an improviser at any stage in your career, I guarantee that you’re going to love this honest, funny and at times painful look at what happens inside an improv group when success and fame come into the picture. (Check out my interview with Birbiglia on Improv Nerd).

Birbiglia is the writer and director, and even though he is more known as a stand-up, he is able to take the audience into the improv sub-culture and show very clearly how we improvisers think and act.

For me, this movie was personal — so personal that a couple of times I found myself crying, something I reserve only for sports movies.

I especially loved Birbiglia’s character, Miles. He’s an improviser in the group, as well as an improv teacher. He had auditioned for Weekend Live several years before, and now he’s in his 30s and he’s still holding onto the dream of someday getting on the show. Miles is bitter, entitled, jealous and a comedy snob. You get the sense he feels passed over or that his talent has not been recognized, and all of his feelings start to come out when the casting people for Weekend Live come to one of their improv shows looking for new talent.

As painful as this is to admit, I could really relate to the Miles character, not only because he’s an improviser and an improv teacher, but also because of his personality of a bitter-jealous-entitled-comedy snob who feels he was passed over. I have been that character for many years, and let me tell you, something you don’t want to face in your 30s, 40s, or ever, really, is that maybe you’re not as good as you really thought and that your friends have more talent, confidence and drive than you do to get to the next level. I could relate, too, to how tightly he was trying to hold on to his so-called status in the improv community. No wonder I cried.

The other thing I could relate to is one of my favorite themes in life and that is jealousy — what happens when someone gets something you want. It doesn’t even matter if you want it or not, you are still jealous. What this movie does so beautifully is when one member does get hired, the jealousy of the other members is unspoken or it comes out in a sideways dig about the show or the performance of the member who is now on Weekend Live. Before I was in therapy that is actually how I handled jealousy. I didn’t speak about it, I denied it to myself and others, and then I’d talk trash about people who were getting what I wanted. If you think I’m a mess today, you should have seen me in my 20s and 30s. I was really fucked up.

And finally, the part I think that really made me tear up the most was when one of the members of the group gets a chance to audition for Weekend Live and ends up sabotaging themselves. I know I have written about this before, but I had an audition for Saturday Night Live back in the ’90s. They were going to fly me out to New York, but that weekend, with absolutely no advice or input, I decided I was not going to do it. I marched in to my agent’s basement office that morning, a couple of hours before I was supposed to be boarding the plane, and said “I don’t want to do sketch.” At the time, Dave Koechner was my roommate, and he got hired that season. To say that that was painful is an understatement.

Ultimately, my takeaway from the movie is something that has taken me decades to learn: That in improv, we are trying to recreate a family, to form a community, and to have a sense of belonging. And when all is said and done, if you becomes famous or not, or your friends become famous or not, it is the friendships that we make in improv that really matter.

Don’t Think Twice is playing this weekend at The Music Box in Chicago, as well as at the Landmark Cinema in Los Angeles, and the Elinor Bunin Monroe Film Center and the Bam Rose Cinemas in New York City. Coming to additional cities in August. For more information, check out www.facebook.com/DontThinkTwiceMovie/ 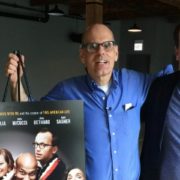