My Favorite Things of 2017 - Jimmy Carrane

This past year was a big year for me personally and professionally, and when I was not running around trying to catch Betsy as she learned how to walk, I actually had some time to watch some TV shows and movies, read some non-improv-related books, catch some live shows and perform myself.

That being said, here are some of favorite things in entertainment of 2017, in no particular order.

You cannot find a better comedy on TV right now than Veep, and with the state of politics in this country, this is definitely the show is to watch. Yes, it can be dark and cynical, but you’ll love the characters, as awful as they can be to each other. This show is so well written, acted, and directed, and it has a great cast. It’s hard for any actor or improviser not to watch this show and wish they were in it. I do.

Also, I cannot think of a better example of an ensemble comedy on television. Julia Louis Dreyfus is outstanding, and after watching almost six seasons, it is no surprise to me that each year she wins an Emmy for her performance. Selena Meyer in 2020! She couldn’t do any worse.

This was not a particular great year for movies but one that sticks out for me from 2017 is Lady Bird. Written and directed by Greta Gerwig, this coming-of-age film explores the relationship between a teenage girl (Saoirse Ronan) and her mother (Laurie Metcalf). Watching Lady Bird deal with her parents, as painful as it is, makes this movie so relatable to all of us who grew up with complicated relationships with our parents. It is such an original script and has everything I love in coming-of-age movies: disappointment, sadness, awkwardness and humor.

I love supporting the indy improv scene in Chicago. Groups like Sand and shows like The Shit Hole are inspiring and take me back to the excitement I felt when I was starting out. This year, the group that blew me away was Moonsharks. I caught them by accident when I went to watch a group I was coaching perform. They played grounded and they emotionally reacted to each other in the scene. They edited the scenes with seamless transformations. When they needed to be silly, or to vary the energy, they did it with abandon and everyone jumped in. They had incredible chemistry — the type you get only by enjoying playing with each other for a long time.

In April, I was so lucky to get to interview Rachel Dratch as part of the Chicago Improv Festival. We played to a sold-out crowd of over 300 people at The Second City Main Stage. Ever have one of those shows where everything goes right and you feel like it’s a dream? This was one of them. Rachel was so honest and open in the interview and improvising with her was so easy, like I had remembered when we performed together in a couple of groups back in the ’90s.

I joked at the top of show that my goal when I started out in improv in my 20s was to be on Main Stage. I just didn’t think it would take 30 years to get there and only last an hour.

And it was worth it. Listen for yourself.

My Favorite Book — The Chicago Cubs: Story of a Curse

I read a shitload of self-help and improv books, but one book I read for pure enjoyment was Rich Cohen’s superb book on the Cubs: The Chicago Cubs: Story of a Curse. What makes Cohen one of my favorite writers is he can take a subject like the history of a losing franchise and weave in his own personal story of being a life-long suffering Cubs fan. He writes in such a honest way that you can feel his heartbreak growing up doomed as Cubs fan, as I did, and his joy when they finally win the World Series in 2016. Other books by Cohen that I also love are Lake Effect and Sweet and Low.

Betsy is over this video, called “Little Snowflake” by Super Simple Songs, but her Dad is not. She has moved on to Frozen and Aladdin, but that doesn’t stop me from showing it to her on my iPhone. I love it because it has a very simple, yet catchy song that gets stuck in your head. The kid who sings the song kills me, especially when he pronounce the word “little” as “lee-del.”

But why I like this little 3-minute video so much is the sad and lonely quality of the snowman. I can relate to him; I am the snowman. It ends with a touch of hope, and unlike most videos for toddlers, this one doesn’t hit you over the head. It lets your imagination decide what really happens. I dare you to watch this 10 times and not get this tune stuck in your head for forever.

My Favorite Performance – Storytelling at Louder Than a Mom

I am hard on my performances. I am a self-hating perfectionist who has used performing to validate myself my whole life. Doesn’t matter if it’s an improv show or solo piece. I rarely feel good about my performances. Except this one.

I had wanted to tell this story for a while, but I had so much shame I could not bring myself to put it up on stage. I had fear of what my family would think. But I did it anyway, and I told the story about how my family try to prevent me from speaking at my Dad’s funeral.

I had gotten a lot of help from Lauren and my friend, Gary Rudoren, but I was still terrified. Ten minutes before I went up I was convinced it was not funny. I was wrong. The audience was with me from the first a couple of seconds until the end. It was one of my best performances ever. You be the judge.

Want to start of 2018 right? Sign up for Jimmy’s Art of Slow Comedy Level 1 class, to learn a unique approach to improv! The Early Bird deadline ends Dec. 27. 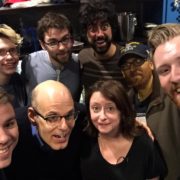 Don't Quit Before the Miracle 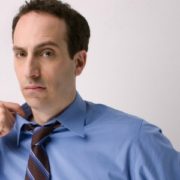 To the older people starting out in improv: You belong

My Wishes for You in 2018
Scroll to top
Menu