8 Secrets to Submitting to an Improv Festival - Jimmy Carrane 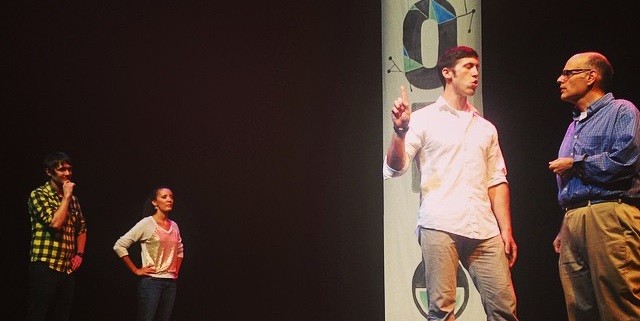 If you’ve been performing with an improv group for a while, you’ve probably started thinking about taking your group on the road, and traveling as a group to an improv festival across the country is not only a fun bonding experience, but an awesome way to take in some shows and workshops and have a fun-filled three-day weekend.

1. Write a Good Description
Most improv festivals require that you submit a description of your group in order to be considered. Don’t just slap something together; really think about what sets your group apart.

“They are phrases that might describe your show compared to other forms of entertainment — and only a few are actually zany. But, when compared to a hundred other comedy acts, they all use those words,” Buckman says. “Make yours stand out from the crowd of hundreds of improv troupes. Find words that really separate your troupe from the other improv acts that look and feel just like you visually. What’s your hook?”

Nicholas Riggs, executive producer of the Tampa Improv Festival, recommends keeping your description to 100 words or less and mentioning your group’s style as well as other festivals you’ve performed at. “Anything that oversells the group is usually an indicator that the group doesn’t have a lot of experience playing away from home,” he adds.

2. Include ALL Requested Materials
In addition to a description, festivals usually require that you submit a high-res image of your group, a video, and other basic information. If you don’t submit all of the information requested, your group comes across as amateur, and you will be less likely to be selected.

“Not including the info requested is always something that I don’t understand, especially with photos and videos,” says PJ Jacokes, producer of the Detroit Improv Festival. “If your troupe is at the level that you think you’re good enough to travel with it, it’s time to get a quality photo and video. Logos aren’t as crucial, but they certainly make your team seem more legit.”

3. Get a Good High-Res Photo
When a festival requests that you submit a high-res photo, that’s exactly what they mean — something that has large enough resolution that it can be printed. To qualify as high-res, your photo should ideally have a resolution of 300dpi (dots per inch). If you’re in doubt, open your photo up in Paint or Photoshop and look at how many pixels wide it is. If it’s not at least 1000 pixels wide, it will not be high res. If you can’t see the entire image when you open it up, that usually means it’s big enough.

Also, Buckman says, “Please do not send us a picture of your diverse cast of eight, if only two or three of you are coming. We want a picture on our website of the actual performers that will be at our festival.”

4. Submit a REALLY Good Video of Your Show
Now, for the most important part: Your video. This is what makes or breaks your admission to a festival, so you want to make it good.

“We focus on videos that really show the live event experience the group creates,” Riggs says. “The truth is, if you don’t have the ability to produce a decent quality video that shows you putting something on stage that’s well-oiled and has a solid audience, it’s probably not time for festival travel.”

Jacokes says a group’s video tells him a lot about the quality of a group. “When watching videos, I look to answer these questions: Is the troupe entertaining? Do they respect their audience? Can they be heard and do they understand basic staging? What can they bring to Detroit that other troupes can’t?”

Festival producers want to see a 10- to 15- minute video of one of your actual shows, not a sizzle reel or highlights reel. So it’s a good idea to film several shows so you can submit your best one.

“The video should show you grabbing the audience’s attention within the first three minutes, holding them at around minute 10, and finding a strong button in the last minute,” Riggs says.

“Most screeners only have to really watch the first five to seven minutes of an improv show to get a sense of how well the competency level and showmanship is,” Buckman says.

Videos must have good sound and lighting and be shot in front of a live audience. Avoid videos that are shot from way behind the audience or from the far side of the front row. Other turnoffs for Buckman include anyone in shorts, baseball caps, open-toed shoes or flip flops.

5. Think About How You Use the Suggestion
One of the things festival organizers tend to look at it your video is how you use the suggestion from the audience.

Jacokes says one of his pet peeves is watching the host pick and choose from the suggestions an audience is calling out. “If you don’t pick the first thing you hear, you tend to start off in the red with me,” he says.

6. Bonus Points If You’re From Out of Town
One way to increase your chances of getting into a festival are to apply to festivals that aren’t in your backyard. Many festivals pride themselves on having groups from all over the country, so if you’re from further away, you may have an advantage.

“We know that our audience and local performers don’t get to travel much or see improv from outside New York, Chicago or LA,” Riggs says. “If a team is willing to come from Seattle to Tampa, we’ll most likely take them and try to help make their trip as affordable as possible. It’s all about getting the whole improv experience for us, so anything that can expose our audience to eclectic styles is a big winner.”

7. Do You Have Diversity?
Both Jacokes and Buckman say they consider diversity – in terms of gender, race and sexual orientation – when selecting groups.

Buckman says he looks for groups that have a good mix of people of color, LGBT folks and women, as well as how well those members are supported by entire group. “We really strive to have a solid mix of good and decent people involved at Out of Bounds, and troupes that consist of four white dudes in flannels, beards and glasses or troupes with preppy dudes in tucked-in collared shirts who don’t let the non-white dudes get their ideas out — you guys are a dime a dozen — so we only need like a small handful of you.”

8. Have a Unique Angle
Festivals also want diversity in terms of types of shows being offered, so the more unique your show is, the better.

Want to study with Jimmy Carrane? His Advanced Art of Slow Comedy Class starts May 18! Spots are still available so sign up today!