I first met Will Hines when he contacted me after an episode of Improv Nerd that he particularly liked. I was floored. I had been aware of his reputation as a teacher and improviser at The UCB in New York, and of course of his terrific blog Improv Nonsense. Whenever one of my peers likes my work, I am both a little surprised and very honored.

At the time, Will was the Artist Director at UCB in New York, a job he had for a very long time before moving to Los Angles. We’ve kept in touch over the years and we finally we got to meet in person in Boise, ID, at the Idaho Laugh Festival. Will is part of the second generation of UCB people, behind the original UCB four, and his contemporaries include people like Billy Merrit, Chris Gethard, Michael Delaney and more, whose knowledge about the history of the place is as fascinating to me as Besser’s, Roberts’, Poehler’s and Walsh’s.

Will has a great mix as a teacher and performer. He’s a pure technician of the game-style of play that UCB is famous for, and he comes from a very thoughtful and caring approach to this art form, which shows in his work on stage, in the classroom, in his blog and now in his latest improv book, How to be the Greatest Improviser on Earth.

Will says the purpose of the book is “to help people who are new to improv learn to play like experts.” The book will be released next week, and anticipation of that, he was kind enough to share with us an excerpt. Here it is. Enjoy!

Become The Most Riveting Person On The Stage

You will know that you are truly being present when this happens: You become the most riveting person on stage.

They say you can’t teach charisma. But you can, and I just taught it to you.

Be fully present, and the audience will watch you like a hawk.

It doesn’t matter how good an actor you are. Or how “naturally charismatic” you are. If you are honestly communicating how the current moment feels, in an authentic way—no matter how clumsily or awkwardly—the audience will pay attention to you. People will magically give you space. Yes. It happens.

I saw a show a million years ago with a nervous, bulldogging man and a quiet, confident woman. He started the scene as a husband on a fishing trip with his wife. He was complaining about the weather and demanding a beer and asking her why she picked this day to go fishing, all the while not giving her time to answer. She had time only to peep things like no and yes and “Boy, it sure is rainy!”

In his defense, the guy was more nervous than actually bullying, but the effect was that his scene partner couldn’t get a word out.

But she was so much more confident as an actor! She did everything physically. Her eyebrows popped up when he revealed that the weather was bad. She looked a bit sad when he said the fish weren’t gonna bite. When he asked for a beer, she leaned over into a cooler and plucked a beer up in sharp, funny movements. I remember she clutched the can just at the top with her fingertips, letting the imaginary can dangle as if it were a gross thing she didn’t want to touch. And when she handed it over to him, and he absent-mindedly took it as he rambled, she gave a quick nod of satisfaction to herself, and at that the audience laughed.

She was in the scene. She was a specific character. She was cool and calm and confident and specific. She was having fun. She was funnier.

And all the while he was talking, we were just watching her.

That woman? MERYL STREEP. No, I’m kidding. I don’t know who she was. But I remember thinking that’s the way to play with a stage hog: You ride the wave in front of you, instead of looking ahead for a different one.
How to be the Greatest Improviser on Earth
by Will Hines

I have always liked what St. Louis improviser Ben Noble has had to say about improv in his weekly blog.

Ben found improv only three years ago. He thought it would be great way to make friends and give him a creative outlet after a break up.

Of course, like most of us who fall in love with this thing called improv, he got way more than he bargained for. As he put it, “Improv has made me a better person and has radically changed everything about this life.”

Not bad for someone who been only improvising for three years.

Today, Ben regularly performs on the house team Bad Magic at The Improv Shop as well as with other groups in various venues in St. Louis.

Last April, as he was struggling to get through The UCB Comedy Improvisational Manual – which he said was packed with great info, but read like a textbook — Ben got an idea. He remembered that desire that all improvisers have when they are first starting out: “To get really good really fast.” And he used that as inspiration for his new book: Improv ABC: The A-Z Guide to Becoming An Unstoppable Improviser.

“I decided to write the book I wish I had when I was coming up and learning the craft — something practical, straightforward, and, most importantly, fun.”

I could not agree with him more. I found his book to be so much fun, in fact, that I actually forget I was reading. But please do not take my word for it. He was kind enough to give us a sample chapter from his book so you can decide for yourself. 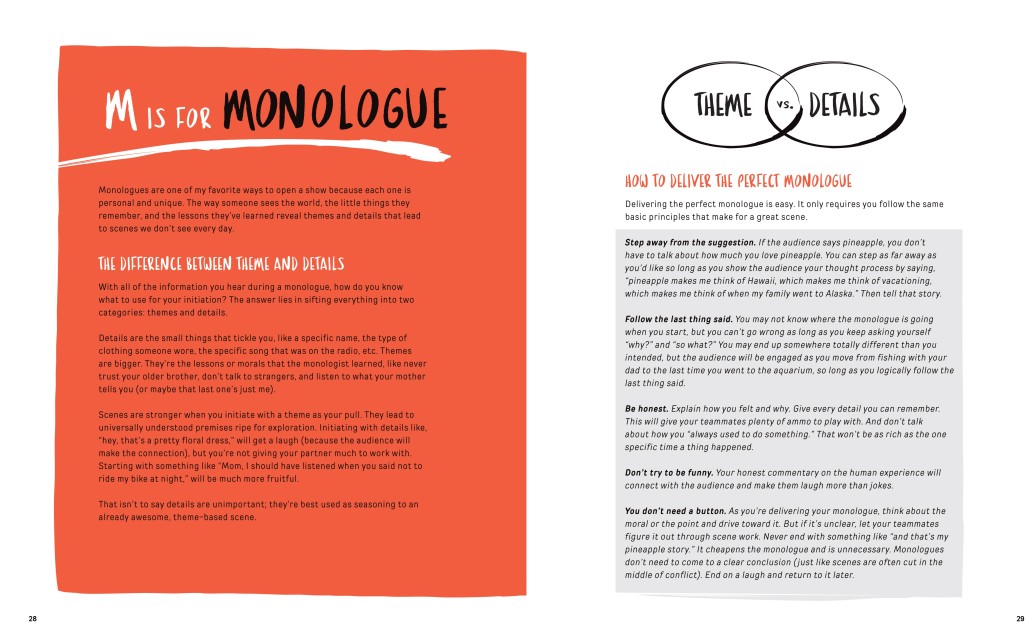 Like this chapter? Get Ben’s entire book at www.improvabc.com.

Want to study with Jimmy Carrane and improve your two-person scenes? Sign up for his Art of Slow Comedy Level 2 class TODAY and get $30 for the Early Bird Discount! Class starts Nov. 4.