It doesn’t matter if you are an improv newbie or a seasoned veteran, when it comes to long form, the same rule applies – You have to have good scene work before using a fancy form. I have said it before and I will say it again, good scene work trumps form every time.

People want to jump into form before developing their scene work, which always turn out disastrous. Since it’s the holiday season and I am in a giving mood, I want to give you three simple long forms that I have been using in my improv classes and in front of audiences for years that always produce great scene work.

Here you go and good luck.

1.Car-Event (4 people)
Set up four chairs as if it’s a car. The premise is four people who know each other are driving to an event, such as a funeral, wedding, rock concert, or college reunion. You will do three beats of this scene, which will be edited by the lights. Like in a Harold, the second beats will be a time dash from the previous scenes. (A time dash means a passage of time.)

For example, four adult children are going to the funeral of their 80-year-old father. Karen reveals a secret that their father did inappropriate things to her when she was younger. It is the first time the three other members have heard that secret. They are surprised. They emotionally react to the news. In this first beat, Carols tells her family she is going to bring it up at the funeral in her eulogy. The other kids go crazy. The get angry at her. It’s three against one. The first scene ends.

The second scene begins 20 minutes after the funeral, where Carol brought up the secret in her eulogy. The family is all quiet. Her older brother, Bob, is holding his eye in the back seat of the car. We organically find out what happened. Bob got punched by Uncle Jim as he was defending his sister, Carol. Bob reveals he had known about Karen’s abuse. We find out the other brother and black sheep, Stephen, hooked up with their old neighbor, “Hot Sue” Sullivan, at the funeral and was in the bathroom when the fight broke out.

The third scene is typically a time period farther away: a year, a month, a week later. It is shorter in length than the first two. It works best almost as a “black out.” It can be as something as simple as:

Carol: “I can’t believe we are going to Uncle Jim’s funeral.”
Stephen: “At least you won’t have to worry he’ll punch you in the face, Bob.”
Lights.

I have also done it where the last scene goes as long as the first two and it’s worked just as well. Experiment and see what works best for you.

Tips: Like any long form, it’s better when the characters know each other and everyone has a shared history. With group scenes, it’s important to “Yes and..” your ass off. Reveal a secret. Emotionally react. Sharing other people’s point of view also helps a great deal. Sometimes the scenes will break down to three against one, but be aware that those alliance may shift. The other important thing is to focus on “the relationships through the event.” If you are going to the Taylor Swift concert and someone is not into Taylor Swift, explore what that says about the character. Why did he or she agree to go?

John: “Ben, you are such a downer. You agreed to go and you don’t really like her.”
Ben: “The only reason I am going is to get laid.”
John: “You are such a pig.”

2. Single Location Montage: (6-10 people)
This is a combination of Montage and Close Quarters. Agree on a location somewhere a group of people could all meet, such as a high school, office building, hotel, or shopping mall. If the suggestion is high school, every scene will take place in or around the high school. Take a couple of seconds to think of locations in and outside the high school, as well as relationships. This will give you variety. Most likely, you will do the obvious scenes like teacher and students in a classroom, parents and the principal in his office, coach and star basketball player in the locker room, two loser students in the smoking area. But see if you can push the locations and relationships to be a little more unique. For example, you could be parents in their Audi who just dropped their kid off and want to have sex, the dope dealer in the parking lot selling weed to the head of English department. You will edit with sweeps. Walk on only when a character is needed or specifically called out. It works better with no tag outs. It’s encouraged for character to come back in other scenes, but it’s not a requirement.

Tips: In any long form, variety is key. We want to see different energies, relationships, locations and characters. In rehearsal/class, sometimes after getting the suggestion, I will side coach my students to figure out what kind of relationship they could have. What kind of location? Don’t go with the most obvious choice. When you feel you have enough options, you can start.

3. Time Dash Documentary (Up to 12 people total, two people at a time)
Two people sit in chairs facing the audience as if they are addressing a video camera. Think of When Harry Met Sally or a reality TV show. Like in the Car-Event, you will do this in three scenes and time dash it. Also it will be edited by the lights.

There are two characters are there for a reason. They could be a romantic couple, business partners, father and son, etc. They name each other. And they listen and build off the last thing that was said by building the history of the relationship a line at a time. A story line will develop. Example: In first scene, we find out Ron and Heather are a couple and they are trying to have a baby. They have been trying for three years. The second scene starts with Heather holding her stomach and we know she is now pregnant. We find out that they went to China to adopt a baby and their doctor called them when they were at the airport and told them they were pregnant. They are not sure now what they are going to do about the adoption. The third and final scene is quick, just like in the Car-Event. It is two years later and we find out they had twins and adapted Simon from China.

Tips: In class and rehearsal, start out in silence and read the tension from your partner. This is important because everything you need for your scene is in your partner’s eyes.

Try one of these long forms out and let me know how they go!

Jimmy Carrane’s next Art of Slow Comedy Class begins Jan. 7! Get in on the ground floor of his three-level system. Sign up by Dec. 24 and pay only $249! Or, take Jimmy’s One-Day Workshop on Saturday, Jan. 3 for $79! 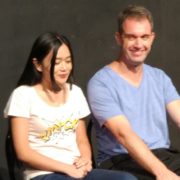