We Go to Improv Shows to Be Inspired | Jimmy Carrane

When I was studying improv back in the ’80s in Chicago, things where simpler. In those days, most people would study at one place at time, and when they finished one program, they would sanely move onto the next.

Stage time was much harder to come by, which gave us hungry improvisers plenty of time to go see improv shows and the free improv sets at Second City.

Today, a lot has changed. There are so many more improv programs and people are studying at multiple theaters at time. We now have as many places to perform improv in the city as there are Starbucks. This means hungry improvisers starting out don’t go out and see improv shows.

The reason is simple: Given the choice, most improvisers would rather be in a show than see one. You can’t compete with this. But going to shows is an important part of learning, and something everyone should take the time to do once in a while.

The other night, I found myself at an improv show in the back of a really cool coffee house on the city’s north side. The show was outside on a cement patio. The audience sat on wooden picnic tables. They created a stage area by rigging up two lights and directing them towards the back of a brick wall of the apartment building next store. It wasn’t ideal, but it worked.

I was there because I was coaching the group Improv Bus, and I wanted to watch their set and give them notes. They went up and did a great job. They had really accomplished everything we had been working on in the last couple of rehearsals. I was proud of them. Really proud.

Then the group that hosted the night, Moonsharks, hit the stage. I had never heard of them, shame on me. They blew me away. What impressed me was their scene work. They played grounded and emotionally react to each other in the scene. They edited the scenes with seamless transformations. When they needed to be silly, or to vary the energy, they did it with abandon and everyone jumped in. They had incredible chemistry — the type you get only by enjoying playing with each other for a long time.

After the show, the cast of the Improv Bus and myself crowded around a picnic table to talk about our set. As I finished giving notes, I could tell by the sound in their voices that they had all been inspired by Moonsharks, including me. We spent more time talking about Moonsharks’ set then our own.

This quickly reminded me why I encourage my students to go to improv shows. Sure, there’s the obvious, the technical side — you go and watch great players make great moves that you want to emulate and you get ideas for new forms. But what I forgot was the real reason we went to see improv shows in those early days was to get inspired. Today’s improvisers, whose over-committed-life includes taking three classes at the same time while performing with six teams at 14 different venues through the city — have left no room for inspiration.

As artists, inspiration is what drives us. Keep us going. Gives us something to aspire to be. Great artists get inspired by other great artists. Improv is no different.

You may find yourself in a show that has inspired other people. That is the highest honor.

I can think of two improv shows I was a part of way back in the day, Jazz Freddy and Naked, that people said to me years later were shows that had inspired them. They got the chance to be inspired because they took a night off of bar-prov and went to see those shows.

I get it. Not all improv shows will inspire. Some will leave you angry because they are so fucking bad. So be picky, but go, because if improv is what you want to do, you will never be inspired by it unless you go to improv shows.

And, please don’t be like me and take inspiration for granted, because it’s like putting gas in your car — it keeps it going and you don’t want to run out of it during your millionth improv show of the week because you didn’t check the light.

What shows have inspired you over the years? And by seeing them perform, what did they inspire you to create? I’d love to hear. 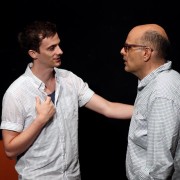