If you have been doing improv for a while you will eventually get a chance to audition for some pretty cool stuff. Stuff you will really want to get. It may be for a Harold team, or a show, or if you’re lucky, even bigger things like a role on TV or film. Some stuff you will get and some you will have the opportunity to choke — you know, blow it, bomb, stink up the room.

Why do we choke in auditions? There are a million reasons. All I know is it cannot be avoided. It’s real. It exists. When it happens, it’s as painful as getting your hand slammed in the car door. The point is, it hurts.

Last month, I had a big audition for me. It was for two lines as shlubby drug dealer for the NBC show Chicago PD.   Because it was  for a network TV shows, and  I get scared whenever I audition for this particular casting director, and  I knew there was a good chance I was going to choke.

Even though I had over rehearsed the lines in the front of the mirror in the bathroom at my house and on the L on the way downtown, it didn’t seem to make a difference.

When I got into the audition room and stood in front of the camera, my breathing stopped and my heart rate increased. I was light headed and could not feel my hands. The casting director read the script and gave me my cue. That’s when I went blank. Deer-in-the- head-lights-blank.

Trying to recover, I stated the obvious, “I am drawing a blank.” (Remember, this was two lousy lines for Christ’s sake!) The casting director read the lines I was supposed to say out loud before she gave me another try. On the second take, I forced the lines out of my mouth, which by this time had gone dry. In terms of performance, I had clearly choked, and this time it only took two lines to do so. I had broken my old record.

Here is where the story gets good. Sure, I felt shame and fear that I would never be called back in, but they weren’t at my usual toxic levels. And just as the negative voices started in my head — “You’re a bad actor,” “You need to quit” — they were interrupted by one gentle thought: “How about you just got nervous?”

I have been auditioning for close to 25 years and choking for way more than that, and I have NEVER had that kind of thought. The truth is, I’m not a bad actor. I have gotten my fair share of parts on network TV shows and major studio movies when they come to Chicago, and some have been larger parts then what I just auditioned/choked for, so to say I am bad actor was a lie.

What was true was I got nervous. I actually knew the lines, and once again, I psyched myself out. It was also clear that what I need to do next time is to take care of myself and calm my nerves.

What surprised me was how kind I was to myself under these circumstances. I do not have the reputation for being particularly nice to myself, especially when I think I  fuck up. Not only did I realize that being kind to myself stopped my shame spiral, but also I realized that I might actually be getting better. The whole aftermath of choking lasted a matter of minutes when it normally would last days, sometimes weeks. Now the only thing that scares me now is what am I going to do with all of this free time?

Want to study with Jimmy Carrane? Sign up for his next Two-Person Scene Tune-Up on Aug. 22! This 3-hour workshop is open to 14 people. Register today. 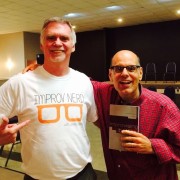 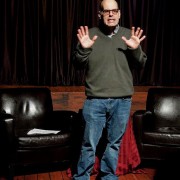 My wife thinks I'm not a good actor
1 reply