How a Bear Taught Me to Follow the Fun | Jimmy Carrane

I have learned in improv that if something is fun in a scene, do more of it.

I get that’s how it works in improv, but I’m not as good at applying that same concept in my own life.

But the other day, I was driving home from the grocery store with my two-and-half year old daughter, Betsy, and when I turned down the alley behind our house, I saw a gigantic tan stuffed teddy bear sitting by the dumpster. He looked so lonely leaning on the brick wall, so I said to Betsy, “Do you want him?”

Kind of a stupid question. What toddler would not want a brand new (looking) huge stuffed bear that was close to five feet tall?

But for once, I put those thoughts out of my head and just decided to embrace the fun.

Even though no one else seemed to want him, I still felt a little self-conscious getting out of the car and squeezing him into the front passenger’s seat. I didn’t want my neighbors seeing me picking a toy out of the trash for my daughter. I mean, as an improv teacher, I have an image to uphold.

As I pulled into our garage, which is about 100 yards from the dumpster, I started to have doubts, as most parents would, that I didn’t do the right thing by picking up the bear. I didn’t know the circumstances about why this orphan bear had been left in the alley. I did like the idea that we were saving him, though.

Still unsure about my decision to bring this stuffed animal into our home, I told Betsy we could only keep him for two days. She agreed.

That night after she want to sleep, I moved him from the den to the garage, figuring if he did have some bad energy it would be contained to the garage.

The next day, Betsy and her nanny headed out to get bagels, and they put the bear in the car with them. By the time they got home, Betsy had named the bear Pete.

Soon, the bear was back up in our family room, making himself part of the family.

That night Betsy and I put a blanket on him and she wanted to scratch his back and sing him a song to put him to sleep, just like I do when I put her to sleep. I even added a voice to him that she seemed to really love.

The next morning I needed Pete’s help. Betsy was scared to go to preschool because she was going to have a substitute teacher, and I figured Pete could be a positive distraction for Betsy’s fear, so I told her to feed him breakfast (a chocolate Dunkin’ munchkin), and he came back in the car with us again.

As you can guess, we’ve now gone way past the two days that Pete was allowed to stay. I mean, how can you kick someone out who is earning his keep?

What has become clear to me is that I didn’t pick Pete out of the garbage for Betsy. I did it for me.

We are taught in improv to follow the fun, and if something is fun just keep doing more of it. Maybe I am starting to take my own advice. Thanks for the lesson, Pete. Stay as long as you like.

Starting to think about your summer? Make plans now to take one of Jimmy’s Art of Slow Comedy Summer Intensives! Happening July 27-28 and Aug. 10-11. Sign up today! 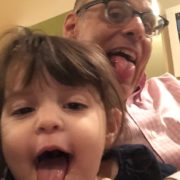 Getting back the joy 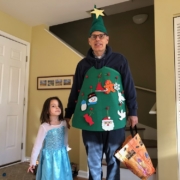 5 Ways to Have More Fun This Year
3 replies

3 Ways to Grow As an Improviser