Why You Shouldn't Try to Control Play | Jimmy Carrane 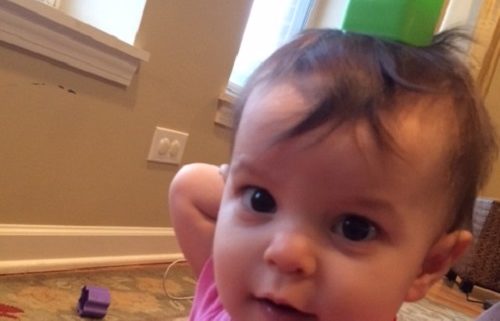 My wife, Lauren, and I were lying on the living room rug playing with our 11-month-old daughter, Betsy. She was playing quietly with these wooden blocks, and I was holding one in my hand when Lauren said, “Give it to her. Give her the block.”

As you might suspect I don’t like to be told what to do, especially around the subject of play. I was hurt and shut down. I handed Betsy the block, but I held onto the resentment towards Lauren.

In my mind, Lauren was trying to control how we were playing, and this was a good lesson for me, because I cannot tell you how many times I have done this when I have been improvising. Hundreds of times, I kid you not. This doesn’t count the millions of times I’ve done it in my life, as well.

If you don’t have a clue what I am talking about in terms of improv, let me give you some examples. Have you ever done a scene where you are literally telling people what to do on stage, or where you were talking so much you didn’t give them space to respond, or you “steam rolled” the scene with your brilliant premise? Or have you ever played the same angry character over and over again? All of those are attempts to try to control how a scene goes, effectively trying to control how other people play.

Just so you know, I know what I am talking about because I have been guilty of these things for years, and I’d like to apologize to all of the improvisers who have been affected by me playing this way. Whenever I have tried to control a scene, the motivation has always been the same: Fear. Control is just a more PC name for fear.

As I look back at all the times I went out on stage and tried to control the scene, it was usually because I held myself back and was afraid to get out there, or because I was afraid that other people on my team were more talented, getting more stage time, and getting more laughs, and I needed to put to a stop to it.

The great thing about improv is the audience is the judge in all of this. They know when someone is trying to control another person’s actions on stage by “steam rolling” a scene or not allowing someone else to speak. The audience may not be able to articulate it, but they won’t laugh as much or applaud as loudly.

If you are a smart enough player — even if you refuse to listen to your teachers, or directors or teammates — you will eventually realize the audience is telling you the truth. And as painful as is it, it might be in everyone’s best interest to let go of your control schtick.

Play is a sacred thing. There are no rules to it; just ask Betsy. That is what improv classes are all about – trying to relearn the skills that have been beaten out of us over a lifetime so we can play like we did when were 11 months old. Control stops the play. It replaces the joy and spontaneity with fear and anxiety. It makes it 100 times harder to be creative.

If you have been guilty of being controlling as I have been, I get it that habits are hard to break. And if you get anything from this silly little blog, I hope it’s that you have become aware that by trying to control others really doesn’t work — in improv or in life.

Laughter is the Best Medicine